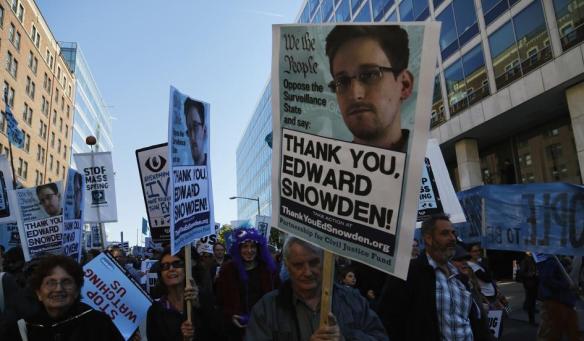 It was just over a year ago this week that former U.S. intelligence contractor Edward Snowden leaked a trove of secret National Security Agency documents detailing the agency’s massive online spy program. What and how much Snowden took remains a mystery.

On Tuesday, James Clapper, the director of National Intelligence, told The Washington Post that Snowden took less than the agency previously thought. So what should we make of Clapper’s claim? Snowden revealed that the NSA tracks cellphones, collects call logs of Americans, uses a secret court to obtain e-mails, chats, photos and videos from Silicon Valley tech companies, and it spies of foreign allies.

According to Clapper, however, “some things we thought he got, he apparently didn’t.” What it was that he didn’t get, Clapper, did not, of course, elaborate upon. In his interview with the Post, Clapper added that the U.S. intelligence community now believes that many of the files Snowden “looked at” he was not able to take from the agency’s servers; and that those he did manage to walk away with weren’t as damaging as it had initially believed.

The original estimate of Snowden’s haul was about 1.77 million documents. That number appears to have first been given on a controversial 60 Minutes segment on the NSA that, since its airing in December of last year, has drawn the ire of media outlets for taking a notably pro-NSA stance. “It was hard to watch the NSA segment and not wonder who was minding the store,” David Carr wrote in The New York Times.

“I never thought it was an accurate estimate,” longtime NSA reporter and author James Bamford tells Newsweek about the NSA’s initial number of documents that were stolen. He adds that Clapper’s new estimate, about 1.5 million, probably “reflects reality.”

How Much Did Snowden Take? Not Even the NSA Really Knows